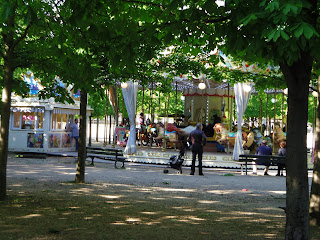 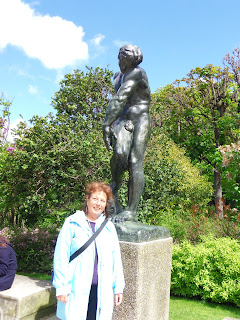 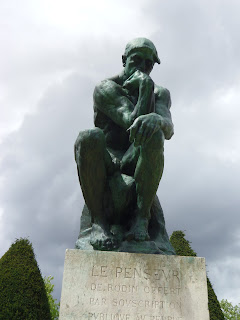 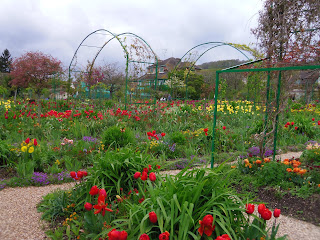 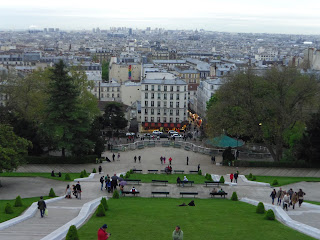 First, a few more photos. . .The one above is from Sacre Coeur overlooking the city. It's really an amazing view. Today was another museum day cos I had a pass. I learned what all good tourists learn: I can only take in so much in one day! The day's highlight was the Rodin Musem and gardens. Once again the environment in which the art is set is as spectacular as the art! Hooray for Parisian landscape designers and gardeners!!! What a deeply peaceful place! Rodin's huge bronzes are scattered among the massive trees, where people are free to not only look at them but touch them. Went back to the Louvre briefly to see the Greek sculptures. . .such grace in the human form and the softness of the draping clothing. . .hard to believe it was carved from stone. Massive Athenas and athletes by Praxiteles, who apparently was the first to sculpt nudes. The Louvre also had the only complete Book of Hours by the Limbourg brothers for the Duc de Berry. Tiny tiny, intricate patterns of leaves, vines and flowers, surrounding richly colored pictures; pages of ; tons of gold leaf. Such fine work. Who has the patience in modern times to create something like this? It was apparently the work of several years. It's beautifully displayed so that I could look at it very closely and enjoy the detail.
The sun was out by mid-day. It felt almost unreal. I think half of Paris was out to greet the blue skies. The parks were jammed. A walk through the Tuileries where I was once again impressed by the enormous chestnut trees in full bloom. The pink white blossoms are kind of like the local cherry blossom festival. The loss of chestnut trees in America is a big one.
Marjolaine returns tomorrow for 2 days. I may go back to Giverny on Wednesday.
Posted by cynthiawrites at 2:17 PM