Posted by cynthiawrites at 7:58 PM No comments:

Perfect last day. . .a visit to Kew Gardens. If I lived here, I would come every week. Heaven. . .in the rain. I was not the only one undeterred by the rain. I forgot that rain does not keep English people or Europeans indoors. So a day of tree heaven. If it hadn’t been drizzling, I might have taken 500 photos of the trees.
Home tomorrow! Bonsoir, mes amis!~ 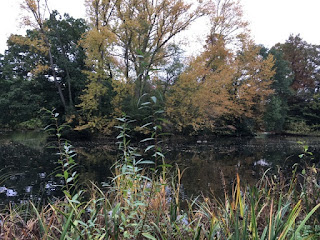 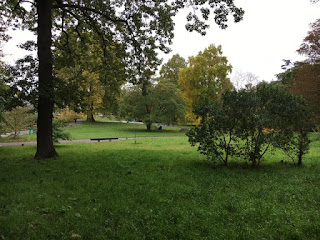 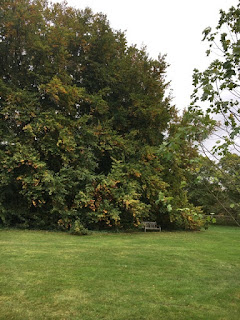 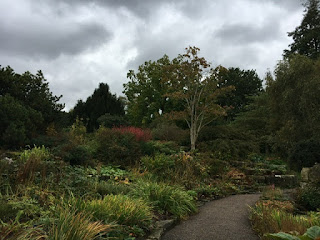 Posted by cynthiawrites at 12:28 PM No comments:

Last day in the UK. On Saturday, a most wonderful, peaceful and swift train journey down from Scotland to London. For this journey, so much better than flying. Trains are so soothing. Hardly closed my eyes as I drank in the landscape, first part with pouring rain, then clearer as we got deeper into England. I am profoundly impressed at how much open land they have preserved here on this small island with a huge  population. . .woods and fields and farmland and pastures with sheep grazing. So nourishing, so green.
The last time I was in Scotland (1970!) I had a strong feeling to leave ASAP and get to England. On that journey, I went directly to the gorgeous Lake District. Once I visited Holyrood Palace on this trip, I noticed the same feeling return, despite the beauty all around me.
After the train journey, I was able to meet with the wonderful Frances Knight. Funny thing, catching up, when the dominant feeling is that no time at all had passed since we last met—which was in Vlodrop, 30 years ago. Renewing these old connections has been an important and deeply sweet part of my journey, one of the primary factors that inspired it.
Yesterday’s plans diverted by non-user-friendly weather once more. But I did have a nice journey through the National Gallery and saw their special Gauguin exhibit. Meditated in St.Martin’s in the Field church, world-famous for its music. Towards the end, a celestial vocal group came in to rehearse. Such exquisite voices. I blissed out!
Today, back to Kew Gardens, despite the weather. Home on Tuesday.
Posted by cynthiawrites at 4:25 AM No comments:

I had to change airbnb locations on Thursday, and found myself looking right at Holyrood Park. What a fantastically beautiful and imposing place. It’s the site of an ancient volcano, and the crags and peaks and slopes, carry  a power that is hard to name, but cannot be missed. I hope to climb to the high point, called Arthur’s seat, today, but woke up to cold, heavy rain. Oh well. I did get to roam around the park a bit yesterday—it felt like such a wild place, so far from city life. Lovely to walk on green earth, however drenched! Then I visited Holyrood Palace, now the residence of the queen when she visits Scotland. But once upon a time it was home to Mary Queen of Scots, a forever object of fascination for me. Hard to imagine a more complex and tragic life—used by so many and loved by so few.
Today, a respite from touristing. Just way too cold and wet. The public transport is good, but everything still requires lots of walking. That’s something I will miss when home. Walking and walking for almost everything.
Tomorrow back to London. This time via train. I look forward to moving thru the British landscape. It’s warmer and dryer down south as well. Hoping to see Frances Knight on Saturday, for those of you who know her.
Some photos of Holyrood Park and Palace. 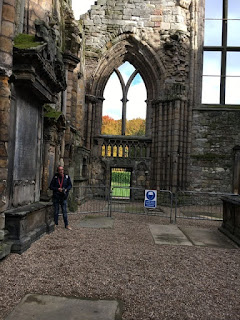 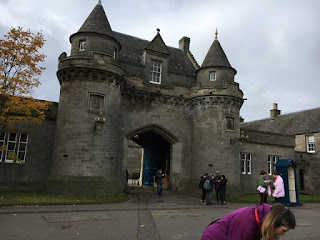 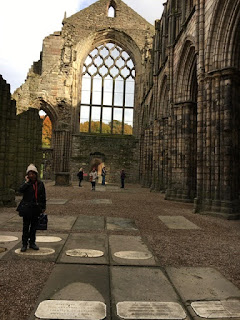 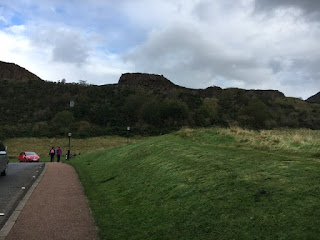 Forgot to include these photos of the magical path to Roslyn Castle. The chapel was like a gingerbread  structure come to life. 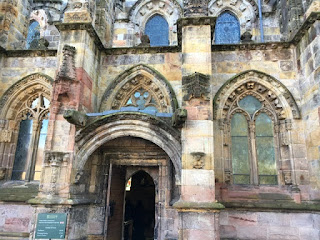 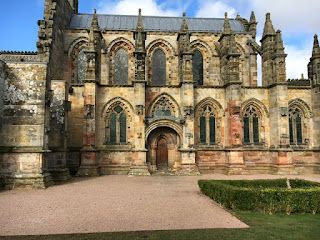 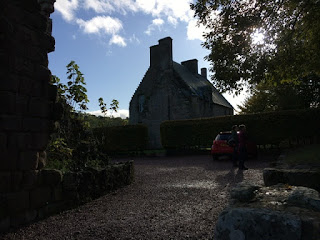 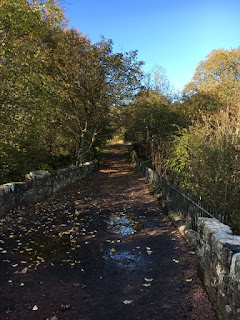 Posted by cynthiawrites at 1:52 AM No comments:

Wednesday nite. Most of Monday was spent getting to Edinburgh, but I still had a couple of roaming hours. I’m in a great neighborhood, right near Grassmarket and Victoria Street which winds steeply uphill, lined with small shops with lots of character. At the top of the hill, I was greeted by the sound of bagpipes. Big sigh. Seems like someone is playing on that corner most every day and I loved it. Being at a high point in the city, the views all the way down to the water were expansive and inspiring in all directions. The sky over Edinburgh is powerful and forever changing. A dozen shades of grey moving across soft blue. At sunset, the softest rose added to the mix.
Spent a large chunk of Thursday exploring Edinburgh Castle, a vast and complex structure at the city’s peak. Saw the royal crown and scepter, and most fascinating, the Stone of Scone, or Stone of Destiny, a simple sandstone piece full of esoteric carvings. All the monarchs sit on it when coronated. In 1296, King Edward I stole it from Scotland and installed it in the British coronation throne. It was returned only recently to Scotland, but the current Queen Elizabeth had it brought down to London for her coronation. Hmmm. And oh, the complex history. The royal family members seem to have been forever quarreling, and heads rolled and wars followed one on the other. Each round creating changes in the castle itself. . .towers built and destroyed; rooms changing purpose; fortifications increasing, etc.
The views were consistently spectacular, dominated by powerful movements of the clouds, light and dark. 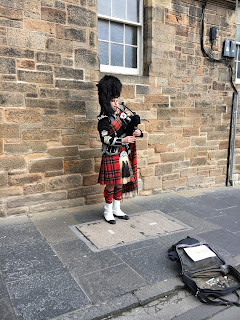 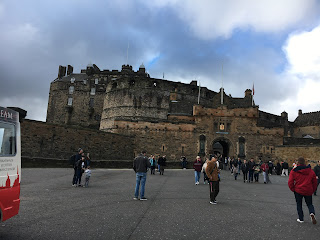 Today Roslyn Chapel at last. Started out with heavy rain and cold temps (I may never get used to it) but ended with delicious sunshine. The area surrounding the chapel is exquisite, valley and ridges, all heavily forested. All those beloved trees. All those shades of green. Heaven. The chapel itself is quite small, but has a sense of magic about it and profound sweetness. Virtually every inch is covered with carvings, many emphasizing the joy and fecundity of the natural world, stories, endless religious symbolism. Lots of green men. All very intentional, as anything carved from stone must be.
The builder of the original chapel and many of his descendants were leaders in the Masonic movement, and probably Templars as well. Wish I could have taken pictures to share, but not allowed. The tour guides say that their annual visitors have increased from 36,000 per year to 190,000 per year since the the movie the Da Vinci Code came out. However, they deny the existence of the fabled 6-pointed star and the mysterious door in the crypt floor.
Meditated 3 separate times in the chapel and wandered the outside as well, before feeling the journey was complete. Got the “download” for next year’s mentoring program I think, and felt like my energy had wildly increased by the time I was done. Then I took a short and wondrously green walk to the castle where the St. Claires still live. What a spot! It overlooks a deeply wooded valley and is surrounded by hills and woods in all directions. Paradise.

Posted by cynthiawrites at 1:34 PM No comments: 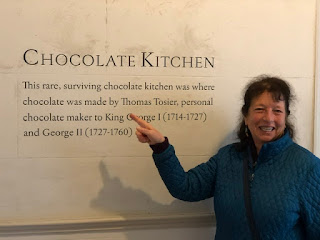 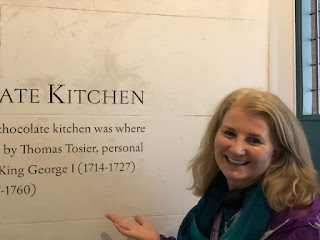 Posted by cynthiawrites at 11:26 AM No comments: